According to the lore, it’s really tough for a TV show to last more than a few seasons. It’s even tougher for it to stay good. And it’s basically impossible for it to stay at the very top of its game (and the top of everyone else’s game too).

Much like great rock’n’roll is based around “three chords and the truth,”, Supernatural has a similar stripped-back but insanely high-yielding premise and story engine: two brothers, a ’67 Impala, and an unending supply of monsters.

Unending supply of monsters not pictured

From that simplest of foundations, the various show runners, from Eric Kripke through Sera Gamble to Carver/Edlund, have forged eleven unstoppable, powerhouse seasons. We have to say it again: It’s seriously rare for a TV drama to be punching with the same weight after eleven seasons.

Yet Supernatural is hitting harder than ever.

How do they do that? How do they deal with the apocalypse in season 5, and still keep raising the stakes in season 11? They find a way. They work it out. They always do. Here’s how —

They take the key ingredients for good drama: dynamic character dynamics (yeah, we went there), reversals, setups, payoffs and callbacks, developing motifs, and a constant evolving of the stakes, and the format. And they use a few key, powerful questions to power it: What does family mean? Where is home? What does that even mean when you’re constantly on the run, on the move, on the hunt? 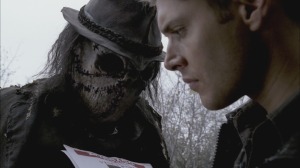 Dean. And a scarecrow (spoiler: not one of the good guys).

And then they execute that with extremely smart, clever, self-aware writing, inventive but grounded directing, and some truly great acting. 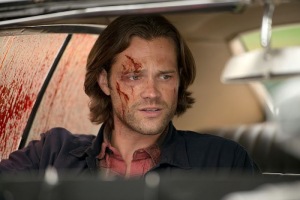 In this show, drama, plot, character, emotion and humor are all intertwined. They’re all one thing. There are heavy moments, terrifying moments, light moments, all bound by a roughhouse humor, the kind of humor that helps you cope with the uncopable, that helps you deal with stuff that’s way above your pay grade. It’s humor like a bar brawl; the Winchesters trade quips like punches, sometimes alongside actual punches (they are brothers, after all).

Watch the pilot again, and see how show creator Eric Kripke did it. It’s deceptively simple. We see the two boys at a very young age as the defining incident of their lives takes place, then we cut to 22 years later when Sam is at college, and the same incident repeats, just as Dean comes back into Sam’s life. The gears of life grind on, and Sam has no choice but to follow Dean into the wilderness.

And THAT’s how you set up a series in your pilot.

Sam was supposed to be the lead character, the Luke Skywalker, while Dean was positioned as the Han Solo type, essential, but secondary to the lead. That soon changed as both brothers took and held center stage. The writers gave Dean more to do alongside Sam, and that’s one of the key strengths of the show: if you want your show to last, give your actors something to do. Both Jared Padalecki and Jensen Ackles get intense emotional scenes, awkward and hilarious physical comedy, subtle snark, action, confusion, heartbreak, fear, hope, cynicism, soul-less fury, and much more besides. The showrunners keep throwing stuff at them, and they keep hitting acting home runs.

Supernatural keeps things fresh and relevant in other ways too. It’s important to nourish your fanbase, to be self-aware, to be able to poke fun at your own show, and not be scared to evolve your format and characters. The show gradually introduced two essential characters, the angel Castiel, and the demon Crowley, firstly as small roles for a few episodes, but, as the brilliant Misha Collins (proving that “acting on camera” really is one of his “special skills”) and genius Mark Sheppard worked hard, crushing it on a regular basis, they proved how capable they were with the show’s tone (and how popular they were with the fans), and they became series regulars alongside the brothers. With four leads, the emotional and plot possibilities increased exponentially, allowing for season-long arcs based on Castiel/Heaven, and Crowley/Hell. 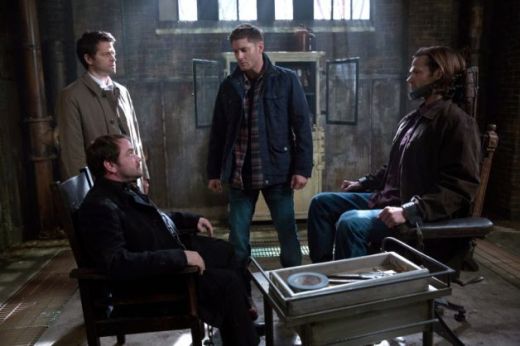 Nourishing the fanbase and having the skill to be meta without sacrificing the integrity of the show (going beyond postmodern to a post-postmodern state, a kind of genuine and sincere postmodernism) has also helped the show stay as damn good as it’s ever been. The 200th episode was a beautiful example of how a show can deconstruct itself and still move you to tears. Once a show proves it can do that… it can do any damn thing it wants.

So, 11 seasons in, Supernatural shows no signs of slowing down, and there’s no reason it should. It’s the show that has everything.