Let’s cut to the chase: The Maze Runner is one of the very best YA movie adaptations to date.

First-time feature director Wes Ball has done a fantastic job taking the best elements of James Dashner’s excellent novel and transforming them into a tense, gritty and emotional cinematic ride. It’s everything you’d want it to be. The maze looks incredible, and the grievers are even more horrifying on screen than they are on the page. Ball has done a tremendous job both serving the source material, as well as bringing new scenes and beats to help it translate fully to screen.

From the very first frame, the movie dives in relentlessly and does a great job in capturing the unnerving unpredictability of what it must feel like to be sent into the maze. The sound design plays a huge role in this movie, and creates a deep, rich, terrifying atmosphere, complimented by the great soundtrack.

It’s extremely well-cast too, with Will Poulter, Thomas Sangster, Dylan O’Brien and Kaya Scodelario as standouts. Scodelario is a brilliant actress; in fact, one of the film’s few flaws is that she is not given nearly enough to do. Hopefully, that will be remedied in the next installment.

It’s already done hugely well at the box office, and the sequel goes into production in a few weeks. Thank goodness, because even a year seems like too long to wait for The Scorch Trials!

All in all, it’s a big, fun, dark and fulfilling experience, one that does YA proud.

Rating: four out of five shuckfaces.

San Diego Comic-Con. One of the most extraordinary experiences you can wish for.

Back in late July, we went past the nerd event horizon and deep into the heart of the geek universe.

We saw things, yo.

T-Rex heads, Transformers, elves, hundreds of tenth and eleventh Doctors, a fully functional Iron Man, a giant Smaug, Guillermo Del Toro walking around, John “Captain Jack” Barrowman, lots of Batmen, and many Spider-Men… one of whom was actually Daniel Radcliffe in disguise so he could walk the convention floor!

Basically, 130,000 amazing geeks pack the convention center for four glorious days that overflow with all things good and great from the worlds of comics, TV, movies, collectibles, gaming… and publishing. Oh yeah, Comic-Con is the secret book convention no one seems to talk about — all the big publishers were there, giving out ARCs and finished copies. We scored around 25 at final count! Plus, there were so many great panels. We went to a few YA-oriented sessions, and were lucky enough to get the chance to speak to Laini Taylor, Leigh Bardugo, Jonathan Mayberry and Rob Thomas (we asked him about a second Veronica Mars movie, he said nothing was decided yet, but more books are on the way), amongst others.

And then there was the man Dashner. Author of the hugely popular MAZE RUNNER trilogy (plus prequel), and also of EYE OF MINDS, book one of the new Mortality Doctrine series, James Dashner had the most excellent job of accompanying the MAZE RUNNER movie cast and crew to multiple panels, joining them to promote the movie.

So naturally, we were PSYCHED to get tickets to Zachary Levi’s Nerd HQ panel at Petco Park for THE MAZE RUNNER, featuring Chuck/Fandral himself as moderator, as well as three of the movie’s stars, Kaya Scodelario, Will Poulter, Dylan O’Brien, the director Wes Ball, and Dashner. 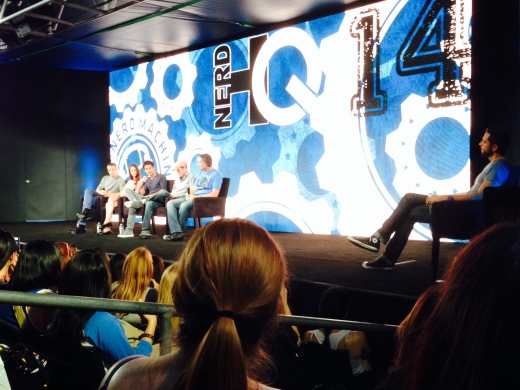 And it was good.

How good? Well, after the panel was done, Wes Ball came back and showed us a sneak peek sequence featuring an actual GRIEVER and it was EXTRAORDINARILY INTENSE. It was a breathtaking, nonstop scene… we all promised not to give too much away, but suffice it to say, it’s the real deal. Gritty, emotional, powerful…. Seriously, this movie looks poised to be HUGE, easily up there with the very best of the YA adaptations. It’s true that, sadly, YA adaptations have had mixed press of late, with praise being reserved more for the contemporary movies rather than the genre ones. But this looks seriously great. And even better, they’re already writing the script for THE SCORCH TRIALS, hoping to shoot in the Fall! Fingers crossed that THE MAZE RUNNER opens big.

But back to the panel.

The three leads have spent a long time promoting this movie already, and the banter flowed back and forth between them easily and good-naturedly. Dashner got in a few jabs of his own, with O’Brien giving it right back, while Mr. Ball mostly kept a low profile under his baseball cap. It’s cool — he knows he has an awesome movie on his hands.

Dashner talked about how he loves HAMLET, hates MADAME BOVARY, and mentioned that THE MAZE RUNNER was influenced by Lord Of The Flies, pointing out that the character of Chuck was inspired by Piggy… and also Chunk from The Goonies.

Halfway through the panel, D got to ask Kaya a question. Somehow he kept it together and spoke in sentences, asking her if her approach to playing Effy in the amazing SKINS was any different to the way she approached playing Teresa in THE MAZE RUNNER. Her answer was so inspiring that we’re going to just quote it here: 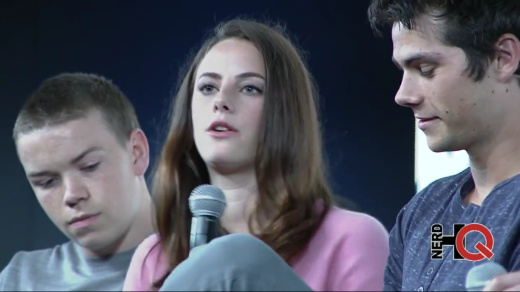 Kaya Scodelario, with Poulter and O’Brien

“I genuinely believe that our, for want of a better word, ‘craft’… that makes it sound wanky and actor-y… but our job, what we do, should be the same in any context, so no matter what the budget is, no matter who the other actors are, or the director, you should always put every part of yourself into it, because it’s a beautiful experience to lose yourself in a character and to learn to respect them and understand them, and hate them sometimes. That’s to me what this job is, it’s what I love. With [the MAZE RUNNER], there was always a fear of is it going to be huge, and are people gonna hate me, are they gonna be angry that I’m not right for it, are they gonna be disappointed… but you have to just completely put that to the side and do the best that you can, as an actor and as a person, to just fulfill that role, no matter what it is.

And I like playing intense women, because as women we are not simple… as much as the world wants us to be, we aren’t, and there’s nothing wrong with that. We shouldn’t be ashamed of having emotions, and of messing up sometimes, and being upset, and angry, that’s all part of what makes us human, so I could never just be the girl next door. I need more than that.”

Needless to say, she got a huge round of applause for that. 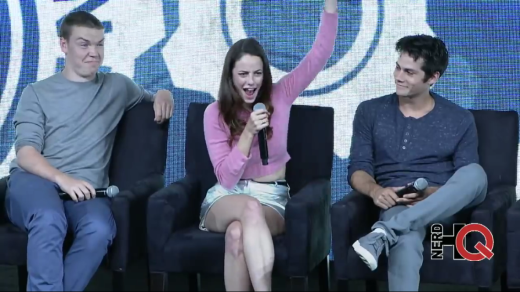 Dashner said they should just stop the panel there, because there’s no way any of their answers could be as good as that! Scodelario is a brilliant actress, and is the only female presence in the film — the reason for which is a key part of the story. Her thoughtful, intelligent answer above bodes well for the integrity of this movie. In addition to her ability to dive deep into complex characters, Scodelario promises to bring a huge amount of heart and soul to the role of Teresa, as well a fearless sense of humor, which we can only endorse. In short, she’s as complex and inspiring as you would want the sole female character to be.

The panel in action

It was an excellent panel, and it made us even more excited for the movie that we were before, ESPECIALLY WHEN THEY SHOWED US GRIEVERS IN ACTION.

Afterwards, we totally stalked Mr. Dashner by the stage door.

He was kind enough to sign our copy of his new YA sci-fi virtual reality thriller, EYE OF MINDS, and told us that he really hoped this one would find an audience and that readers would latch onto it, because it’s a highly personal book for him. Readers, we’ve read it, and it’s really, really good. One of those can’t-put-it-down books, full of characters who grab you, ideas that shock you, and a great balance between dark, messed up twists, and the humor and warmth of three friends as they try to keep it together on a deadly mission. Highly recommended. Whether it’s the terrors of the VirtNet, or the horrors of the Maze (or the Scorch…), Dashner always has an extremely compelling, page-turning style of writing, taking you deep into a sense of place while also keeping the action and character conflicts crackling.

And seriously, if you haven’t read THE MAZE RUNNER yet, please… go and remedy that now. It’s gritty, tightly plotted, thrillingly paced, and full of emotion and intensity. Everything you want in YA sci-fi! Then read THE SCORCH TRIALS and THE DEATH CURE. And then the prequel, THE KILL ORDER. You’ll be glad you did.

And with that, it was time to leave Nerd HQ and Petco Park, and disappear into the night to prepare for another day of geeking out. 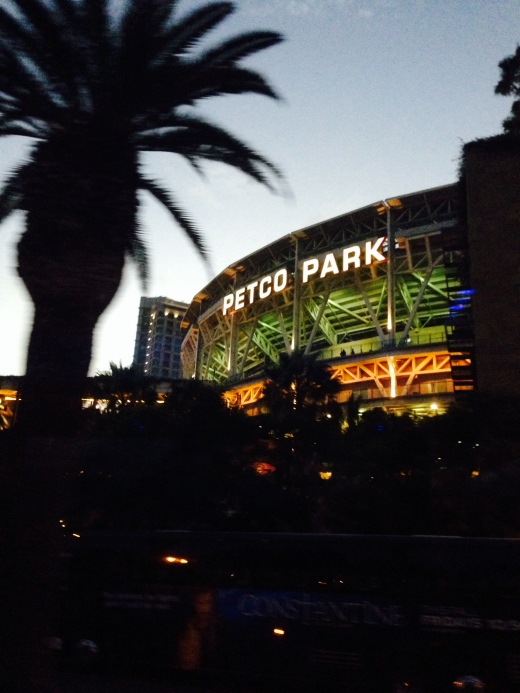