Writer-director Rian Johnson’s first foray into the Star Wars universe is an auspicious one, full of dazzlingly ambitious filmmaking and beautifully bold narrative twists and turns. While not without some minor flaws, this is a triumphant entry in the saga.

While internet scuttlebutt had us thinking the movie would open precisely where J.J. Abrams’ The Force Awakens left us (with Rey offering up Luke’s lightsaber), it turns out that every word they said was wrong. Johnson instead plunges us headlong into a brilliantly dizzying escape attempt by the Resistance which spirals into a thrilling battle sequence with the First Order that would be extraordinary if it was the Act III finale… here it’s the intro, which lets you know just how much of a thrill-ride this movie is going to be (a huge thrill ride, to be clear). It also charts a clear trajectory for Johnson’s take on the story and characters: everything is morally complex, situations are messy and complicated, and there few easy answers.

Of course, we join Rey and Luke on Ahch-To Island soon enough, and, per Luke’s trailer line, this isn’t going to go the way you think. Johnson handles Rey and Luke’s journey in beautifully unexpected ways, which serves as a blueprint for how he handles everything else: there are at least five moments where you feel like the movie is ramping up to an ending when instead it ducks and dives and gives you a much deeper journey, and takes you to narrative places you never expect, which is such a Star Wars thing to do. Although Johnson has his own storytelling moves, including a dark and fresh sense of humor, some beautiful lighting and camerawork, and a willingness to jump around in time and space, he also has a reassuringly sure grasp of what makes Star Wars, Star Wars. The morality and positivity and hope of it all. And all of that is represented most purely in Kelly Marie Tran’s absolutely perfect debut.

This is Tran’s first major movie role, and what a way to start. Playing Resistance engineer Rose, she owns the screen every second she’s on it, more than holding her own with the irrepressible John Boyega (their emotional journey is one of the best things about this movie), and fully centering the movie as its moral compass, as well as being a deeply endearing and fearlessly inspiring presence in the story. It’s a grounded performance that burns bright, and easily fuels the movie through the only section where it seems to lose altitude somewhat—there’s an extended sequence in a casino (this movie’s cantina) that possibly outstays its welcome, although it is critical to Rose’s arc, and also sets some other things in motion that are critical for the end of the movie (again, no spoilers). However, whenever Tran is on screen, narrative concerns fall by the wayside; she’s the movie’s secret weapon in many ways.

But ultimately, this isn’t Rose’s movie, it’s Rey’s, and boy does Daisy Ridley step up and lead this epic journey to a whole new place. There’s an extraordinary purity to the light and fire that Ridley brings to this role, and her quietly emotional and compellingly powerful performance anchors the Star Wars universe in a way we haven’t seen since it began, and Johnson is a smart enough director to allow the camera to just hold on her deeply nuanced emotions. That nuance is complemented by a supremely focused physicality as Rey discovers just what she’s capable of. Johnson serves up some exhilarating and devastating situations and interactions for her, as he does for all his leads, and there’s a huge amount of suspense in her growing connection to Kylo Ren, who is on a complicated journey of his own.

And Adam Driver knows how to play complicated. He builds on the emotionally tortured performance from Awakens and takes it so much further in an intensely physical manifestation of Ren’s rage and pain and fear. We truly don’t know where he’s going to end up by the finale, which is a testament to Johnson’s writing, and to Driver’s powerhouse acting chops. In Ridley and Driver, this universe has two white-hot talents at its forefront, which is tremendously exciting as we contemplate what Episode 9 might hold.

Terribly sadly, that won’t include the wonderful, devastatingly powerful force of nature that was Carrie Fisher. She’s simply fantastic in this movie, leaving us with a performance of grace and intelligence and charisma and humor and charm. She’s everything you expect and also nothing you expect; her Leia is a powerful leader, a woman who will never give up on herself or her people, an inspiring human being of the highest magnitude, and that’s Fisher’s gift to the character, and to us. The best way to honor her legacy is to live inspired by what Leia represents: hope, never backing down, owning your life to the fullest, having a sense of humor about it all, and being compassionate and kind. The world would be a better place if we could all be a little more like Leia, and like Fisher.

She’s a key part of the movie’s overwhelming belief in hope, in the spark that will light the fire that will keep hope alive and ultimately make everything better. Amongst the cute creatures (SO MANY PORGS! Beautiful twinkling crystal foxes!), and the droids (BB-8 is a BOSS in this movie — he gets some AMAZING action scenes!), the movie feels so relevant to what’s happening in the world right now it’s almost painful, but in an exhilarating kind of way. It ends on a note of hope that burns bright and lights the way, not only for the future of the Star Wars universe, but for the future of ours too.

And that’s what you really want from a Star War movie.

Also what we really want from a Star Wars movie? LUKE SKYWALKER F**KING SH*T UP.

Zero spoilers here, but this movie more than makes up for Luke’s lack of dialogue last time around. Mark Hamill gets some fantastic work to do, and he gives a wonderfully detailed performance as the haunted, embittered, lonely Jedi. Hamill truly connects us to that wide-eyed farmboy from A New Hope and really makes us feel the devastating journey he’s been on since he blasted off from Mos Eisley. Hamill is an outstanding actor, and has gravitas and charm to spare, qualities he deploys to an almost weaponized degree here. It’s Rey’s movie, but it’s Luke’s too, and Johnson does a fine job of finessing their arcs (and everyone else’s—Laura Dern and Oscar Isaac have many beautifully played moments) into one propulsive, highly entertaining story that barrels along relentlessly to the extraordinary finale (while still finding time for a fan favorite old friend to show up along the way in spine-tingling fashion).

In short, Rian Johnson wrote and directed an excellent Star Wars movie that is a huge amount of fun, tremendously moving, and that moves the whole franchise forward, setting the stage for J.J. Abrams to deliver something amazing to wrap it all up in Episode 9.

Was there ever any doubt?

Well, sure, OK, a little. We didn’t know for certain that JJ Abrams was going to deliver an extraordinary and beautiful cinematic experience. We thought he would. We hoped.

From the glistening Lucasfilm logo, to that gorgeous blue “A long time ago, in a galaxy far, far away…” to the BLAST of John Williams’ iconic theme as the crawl begins… JJ nailed it and then some.

Along with writers Michael Arndt (Little Miss Sunshine, Toy Story 3) and Lawrence Kasdan (the grand master behind The Empire Strikes Back and Return Of The Jedi), Abrams has crafted something wonderful and exhilarating, moving and hilarious, devastating and thrilling, all in equal measure.

This will be spoiler free, but it’s not spoiling anything to let you know that BB-8 is a more-than-worthy addition to the droid-you’re-looking-for crew. Adam Driver’s Kylo Ren is an extraordinary bad guy, full of resonance, hurt and rage. John Boyega’s Finn is a joy to watch and the source of much of the movie’s off-kilter but brilliant humor. And, in Daisy Ridley’s Rey, we have one of the greatest characters in the Star Wars universe. 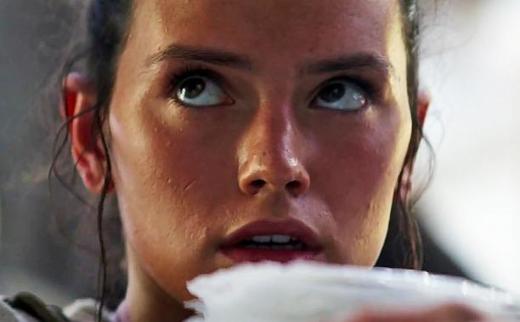 Ridley, who only had a handful of TV screen credits prior to this, plays Rey with heart and nuance, giving us loss, hope, bad-assery, ass-kicking, wise-cracking… and many more things we can’t share with you (spoilers!). Ridley’s story mirrors Rey’s in a lot of ways, and Ridley uses her natural energy to really bring Rey to crackling life.

Adam Driver, so volatile and uncontrollable on HBO’s Girls, dials that up even more here. He’s the only person who could have played Ren, and he brings a tremendous energy to it all. Boyega, who was SO GOOD in Attack The Block, kills it as Finn — he’s hilarious and heartbreaking —  while Oscar Isaac is in the ZONE as the chilled-out greatest pilot in the galaxy. Bodega and Isaac make you root for them immediately, as does Ridley.

And that’s what’s at the heart of this extraordinary journey — you are invested emotionally from the very beginning, and even more intensely as the movie goes on. The story is powerful, and the movie is shot beautifully, unafraid to linger on stunning vistas and bustling scenes of alien life. But it never feels slow. This thing reaches hyperspace right out of the gate, and drops out of it only at the dizzying, thrilling end.

Throughout, this is great storytelling, with wonderful, fully-realized characters, shot in a gritty, intense way, that gives you the feels. All of them. All the feels. #feels 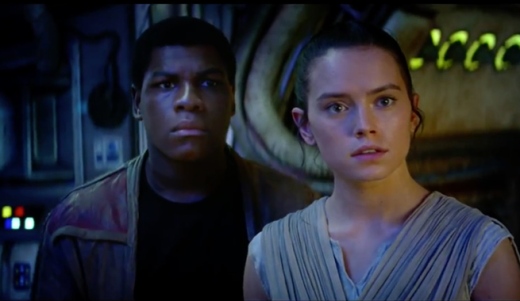 We have new John Williams Star Wars music on a Star Wars movie. And it gives you chills to hear it. As the story flows, so does his music.

The story ends where it needs to, and opens up the door to the next two movies. The blend of the old and the new is seamless, naturalistic, and provides the perfect hand-off to what is to come. We get all our Original Trilogy feels, and plenty of new trilogy feels alongside.

In short, The Force Awakens is nothing less than the reawakening of something powerful, a new force in the universe. It’s everything you want it to be.